I see — I want to see Jesus 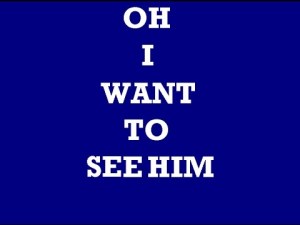 6 After he said these things he spat on the ground, and made some mud from the saliva, and smeared the mud on his eyes.
7 Then he told him,”leave, wash in the pool of Siloam” (which means “Sent”). So he left, washed, and came back seeing.
8 His neighbors and those who had seen him before as a beggar said, “Isn’t this the one who used to sit begging?”
9 Some said, “He’s the one.” Others were saying, “No, but he looks like him.” He kept saying, “I’m the one.”
10 So they said to him, “Then how were your eyes opened?”
11 He answered, “The man called Jesus made mud, smeared it on my eyes, and told me, ‘Leave for Siloam and wash.’ After I went away and washed I received sight.”
12 They said to him, “Where is that person?” He said, “I don’t know.”

I see — I want to see Jesus

We are only part-way through the story of this blind beggar and his encounter with Jesus. Note that he has not seen Jesus at this point. He could not see when Jesus touched him, and when he returned with sight, he could not find Jesus.

In a very real sense, this man’s encounter parallels ours. He went through a time of testing in which he had received sight, but could not see Jesus. He was forced to decide whether Jesus was who he said he was. Believers in Christ spend their lives waiting for him to return and verify their faith. We only know that he has touched us, and that his touch has made a difference. He has given us sight, and that sight makes us long to see him.

LORD, help us to lead all the blind beggars to you.

Jefferson Vann is a former Christian missionary and a candidate for pastoral ministry. You can contact him at marmsky@gmail.com -- !
View all posts by Jefferson Vann →
This entry was posted in faith, second coming and tagged John 9. Bookmark the permalink.