Judges 18:14 The five men who had gone to scout out the land of Laish told their brothers, “Did you know that there are an ephod, household gods, and a carved image and a silver idol in these houses? Now think about what you should do.”
Judges 18:15 So they detoured there and went to the house of the young Levite at the home of Micah and greeted him.
Judges 18:16 The six hundred Danite men were standing by the entrance of the city gate, armed with their weapons of war.
Judges 18:17 Then the five men who had gone to scout out the land went in and took the carved image, the ephod, the household idols, and the silver idol, while the priest was standing by the entrance of the city gate with the six hundred men armed with weapons of war.
Judges 18:18 When they entered Micah’s house and took the carved image, the ephod, the household idols, and the silver idol, the priest said to them, “What are you doing?”
Judges 18:19 They told him, “Shut up. Keep your mouth quiet. Come with us and be a father and a priest to us. Is it better for you to be a priest for the house of one person or for you to be a priest for a tribe and family in Israel?”
Judges 18:20 So the priest was pleased and took his ephod, household idols, and carved image, and went with the people.
Judges 18:21 They prepared to leave, putting their dependents, livestock, and possessions in front of them.
Judges 18:22 After they were some distance from Micah’s house, the men who were in the houses near it were called together and caught up with the Danites.
Judges 18:23 They called to the Danites, who turned to face them, and said to Micah, “What’s the matter with you that you called togetyher the men?”
Judges 18:24 He said, “You took the gods I had made and the priest, and went away. What do I have left? How can you say to me, ‘What’s the matter with you? ‘”
Judges 18:25 The Danites said to him, “Don’t raise your voice against us, or angry men will attack your throat, and you will take away your throat and each throat from your house.”
Judges 18:26 The Danites went on their way, and Micah turned to go back home, because he saw that they were stronger than he was.
Judges 18:27 After they had taken the gods Micah had made and the priest that belonged to him, they went to Laish, to a quiet and unsuspecting people. They struck them down with their swords and burned the city.
Judges 18:28 There was no one to rescue them because it was far from Sidon and they had no alliance with anyone. It was in a valley that belonged to Beth-rehob. They rebuilt the city and lived in it.
Judges 18:29 They named the city Dan, after the name of their ancestor Dan, who was born to Israel. The city was previously named Laish.
Judges 18:30 The Danites set up the carved image for themselves. Jonathan son of Gershom, son of Moses, and his sons were priests for the Danite tribe until the time of the exile from the land.
Judges 18:31 So they set up for themselves Micah’s carved image that he had made, and it was there as long as the house of God was in Shiloh.

This passage concludes the depressing story of Micah and the Levite that began in chapter 17. The reader can see to what extent the Danites were moved by greed and resorted to violence and idolatry to get what they wanted. The assumption was that ownership of the idols, the shrine, and the Levite would bring them good luck, and deter bad luck. Their religion was manmade and cheap, and did not bear the slightest resemblance to that set up by Moses, even though the Levite was a descendant of Moses (30). It was organized rebellion. It was further evidence that without strong godly leadership, the tendency of the people is to revert to animism.

LORD, thank you for king Jesus. Teach us to follow him, and stay away from organized rebellion. 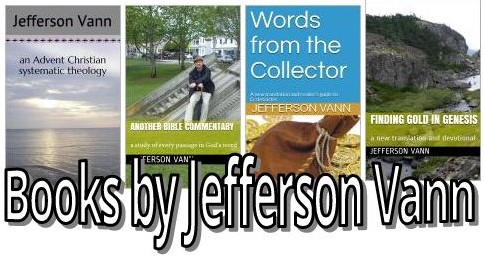 Jefferson Vann is pastor of Piney Grove Advent Christian Church in Delco, North Carolina. You can contact him at marmsky@gmail.com -- !
View all posts by Jefferson Vann →
This entry was posted in animism, rebellion and tagged Judges 18. Bookmark the permalink.