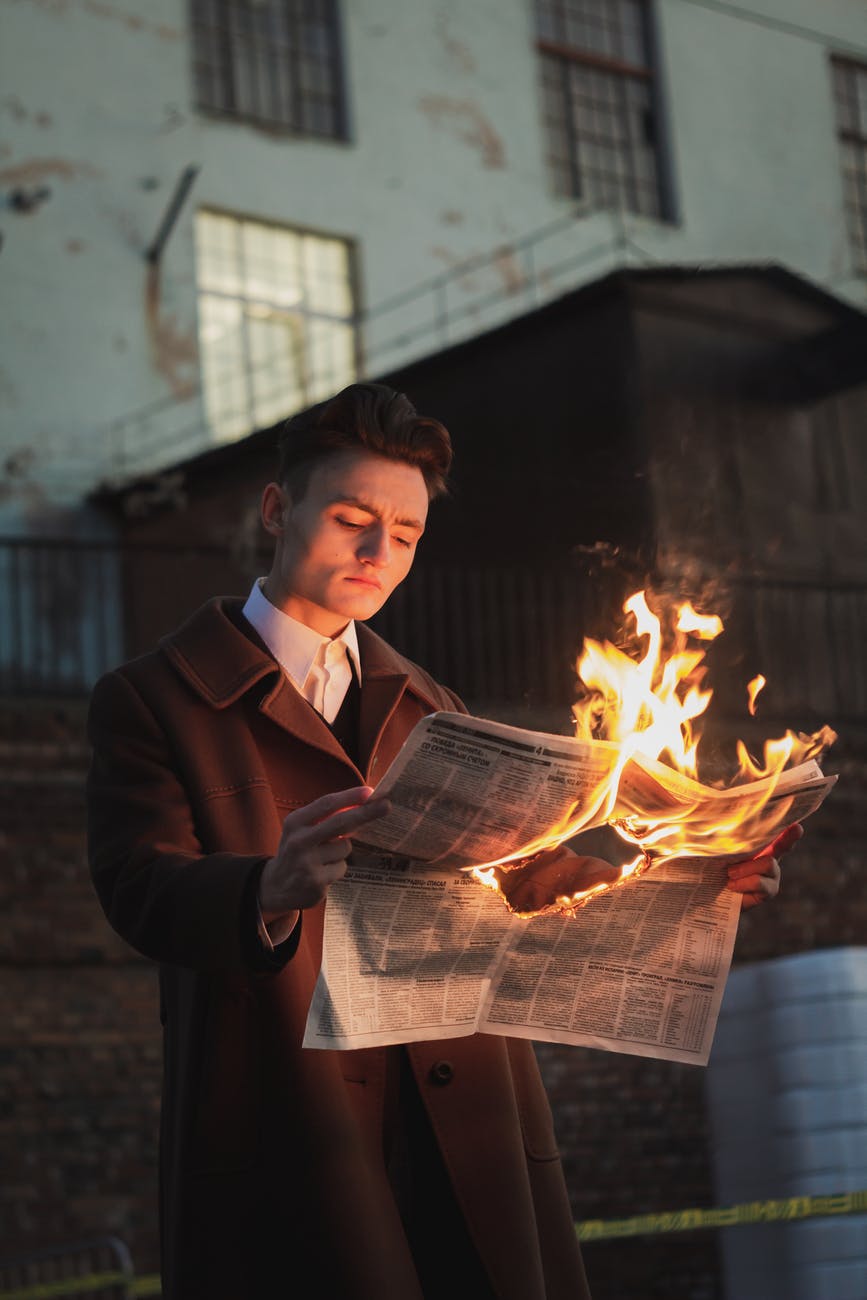 Photo by Danya Gutan on Pexels.com

Jeremiah 36:21 The king sent Jehudi to get the scroll, and he took it from the hall of Elishama the scribe. Jehudi then read it in the hearing of the king and all the officials who were standing by the king.
Jeremiah 36:22 since it was the ninth month, the king was sitting in his winter quarters with a fire burning in front of him.
Jeremiah 36:23 As soon as Jehudi would read three or four columns, Jehoiakim would cut the scroll with a scribe’s knife and throw the columns into the fire in the hearth until the entire scroll was consumed by the fire in the hearth.
Jeremiah 36:24 As they heard all these words, the king and all of his servants did not become terrified or tear their clothes.
Jeremiah 36:25 Even though Elnathan, Delaiah, and Gemariah had urged the king not to burn the scroll, he did not listen to them.
Jeremiah 36:26 Then the king commanded Jerahmeel the king’s son, Seraiah son of Azriel, and Shelemiah son of Abdeel to capture the scribe Baruch and the prophet Jeremiah, but Yahveh had hidden them.

The king and his servants were reading the very words of God, and they were words condemning them and their people to disaster and death. So, why were they not terrified and appalled? Why did they cut up the scroll and burn it instead of tear their clothes in revulsion at the evil those words exposed?

They had made the conscious choice to reject God’s words from Jeremiah, to rename the prophecy as something else.

We human beings have the capacity to rename those truths we choose to reject. As long as we insist that God’s prophets were lunatics and their words were delusions, we can keep cutting and burning.

But be warned. God does not rename the truth. The more we cut and burn, the quicker our appointment to being cut up and burned up in hell. The judge is coming.

Lord, give us a reverence and respect for your holy word.

Jefferson Vann is pastor of Piney Grove Advent Christian Church in Delco, North Carolina. You can contact him at marmsky@gmail.com -- !
View all posts by Jefferson Vann →
This entry was posted in Bible, prophecy, reverence and tagged Jeremiah 36. Bookmark the permalink.