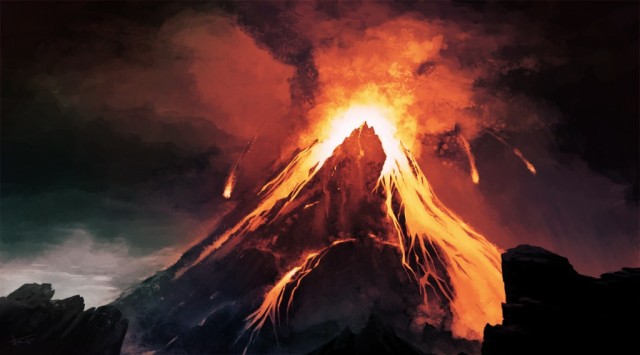 Deuteronomy 18:16 This is what you requested from Yahveh your God at Horeb on the day of the collected assembly and this is what you said: ‘Let us not hear the voice of Yahveh our God again or see this great fire any longer, so that we will not die! ‘
Deuteronomy 18:17 Then Yahveh said to me, ‘They have spoken well.
Deuteronomy 18:18 I will raise up for them a prophet like you from among their brothers. I will put my words in his mouth, and he will tell them everything I command him.

Notice that it was the Israelites themselves who pleaded for an alternate to Sinai’s revelation. They realized their own propensity to sin and fall short of the glory of God — a glory that had been manifested at Sinai. The voice they heard was to them a voice of condemnation. The fire and darkness could only be a precursor to Gehenna. They had to get away from that Mount Doom.

So, if the people would not come into his presence on the mountain, God would send his presence to them through a prophet. He intended to do that all along, but like so many other things, God waits for his people to ask before he gives them what they need.

Ultimately,the answer was — you guessed it — Jesus. He is the revelation of God to a sick, sinful, hurting, needy people. His words are his Father’s words, and they lead to life, not death — forgiveness, not condemnation.

Thank you Lord, for the Prophet who is your presence.

Jefferson Vann is pastor of Piney Grove Advent Christian Church in Delco, North Carolina. You can contact him at marmsky@gmail.com -- !
View all posts by Jefferson Vann →
This entry was posted in Jesus Christ, prophecy, revelation and tagged Deuteronomy 18. Bookmark the permalink.