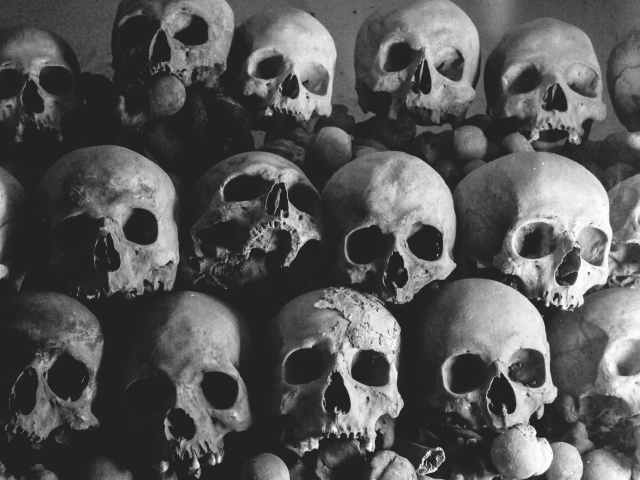 Photo by Felipe Hueb on Pexels.com

Jeremiah 7:30 “You see, the sons of Judah have done what is evil in my eyes.” This is what Yahveh declares. “They have set up their repulsive things in the house that bears my name in order to defile it.

Jeremiah 7:31 They have built the high places of Topheth in Ben Hinnom Valley in order to burn their sons and daughters in the fire, a thing I did not command; It never entered my heart.

Jeremiah 7:32 “So, notice, the days are coming” – this is what Yahveh declares – “when this place will no longer be called Topheth and Ben Hinnom Valley, but the Valley of Slaughter. Topheth will become a cemetery, because there will be no other burial place.

Jeremiah 7:33 The corpses of these people will be food for the birds of the sky and for the wild animals of the land, with no one to scare them away.

Jeremiah 7:34 I will remove from the cities of Judah and the streets of Jerusalem the sound of joy and gladness and the voices of the groom and the bride, because the land will become a desolate waste.

Jeremiah 8:2 They will be exposed to the sun, the moon, and all the stars in the sky, which they have loved, served, followed, consulted, and worshiped. Their bones will not be collected and buried but will become like manure on the soil’s surface.

Jeremiah 8:3 Death will be chosen instead of life by all the remainder of this evil family, those who remain wherever I have banished them.” This is what Yahveh of Armies declares.

Ezekiel saw a vision of dead bones rising again (37:1-14), and his prophecy is brought down to us in history in the Bible and we remember it because of a joyful spiritual song. But nobody made a song about Jeremiah’s prophecy about bones. It’s the other side of the story.

Jeremiah predicted the dissolution and death of the royal family of Judah, together with all the priests and officials of Jerusalem at his time. The Lord would destroy them, wiping them out of existence because of their betrayal and idolatry – even murdering their own children in order to appease pagan gods.

In Jeremiah’s prophecy, the bones of these rulers and those who followed them will be exhumed, and piled on the ground, and the whole valley will be exposed to the open sky – to those things they worshiped.

The idea was so repulsive to the Israelites that they would tell their children about that awful place as a symbol of God’s final judgment. This terrible cemetery of the future, where everything is dead and exposed became a synonym for the final judgment of the wicked itself. This Valley of Slaughter would take place in Ben Hinnom valley. The Greek term would be Gehenna. This is what Jesus was talking about when he warned people to fear God, because he is able to destroy soul and body in Gehenna (Matthew 10:28).

Lord, rescue us from the future terrible fate of those who reject you.

Jefferson Vann is pastor of Piney Grove Advent Christian Church in Delco, North Carolina. You can contact him at marmsky@gmail.com -- !
View all posts by Jefferson Vann →
This entry was posted in destruction in hell, judgment, mortality and tagged Jeremiah 7. Bookmark the permalink.