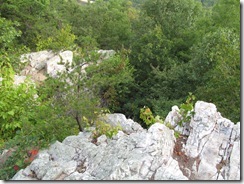 And God said to Jacob, “Get up, go up to Bethel and live there. Make an altar there to the God who appeared to you when you had escaped from your brother Esau.”

2 So Jacob said to his household and to all who were with him, “throw away the foreign gods that you are keeping and purify yourselves and change your clothes.

3 Then let us get up and go up to Bethel, so that I may make there an altar to the God who answers me in the day of my stress and has been with me wherever I have gone.”

4 So they gave to Jacob all the foreign gods that they had, and the rings that were in their ears. Jacob buried them under the oak tree that was near Shechem.

5 And as they set out, a terror from God fell upon the cities that were around them, so that they did not attack the sons of Jacob.

6 And Jacob arrived at Luz (also known as Bethel), which is in the land of Canaan, he and all the people who were with him,

7 so he built an altar there and called the place El-bethel, because there God had revealed himself to him when he had escaped from his brother.

8 And Deborah, Rebekah’s nurse, died, and she was buried under an oak below Bethel. So he called its name Allon-bacuth.[1]

9 Then God appeared to Jacob again, when he came from Paddan-aram, and blessed him.

10 And God said to him, “Your name is Jacob; but your name will no longer be called Jacob, but Israel will be your name.” So he called his name Israel.

11 And God said to him, “I am God Almighty: be fruitful and multiply. A nation and a company of nations shall come from you, and kings shall come out of your own loins.

12 The land that I gave to Abraham and Isaac I will give to you, and I will give the land to your offspring after you.”

13 Then God ascended from him in the place where he had spoken with him.

14 And Jacob set up a memorial in the place where he had spoken with him, a memorial of stone. He poured out a drink offering on it and poured oil on it.

15 So Jacob named the place where God had spoken with him Bethel.

The incidents at Shechem had unnerved Jacob, and he was ready to start anew with his relationship with the God of his fathers. He could not escape his past, but he could make a new effort to grasp his future. That happens to us as believers many times. God does not forsake us when we fail him. He loves us so much that he sacrificed the life of his only Son on a cross for us. He is ready for us when we are ready for him.

Child of God, have you gotten yourself in another tight spot? Have you embarrassed yourself by how selfish you have acted, and by how reckless you have lived. Perhaps you are ready for yet another new start. Rest assured, God is where you left him. He is at your Bethel, and he wants to bless you. Bury all those foreign gods that you have let distract you from your relationship with him, change your clothes, and set course for Bethel again. It is not too late.

LORD, forgive us for being distracted again. We want you, and only you. Help us to make a clean break, and start anew.

Jefferson Vann is a former Christian missionary and a candidate for pastoral ministry. You can contact him at marmsky@gmail.com -- !
View all posts by Jefferson Vann →
This entry was posted in commitment, discipleship, Jacob, relationship with God and tagged Genesis 35. Bookmark the permalink.