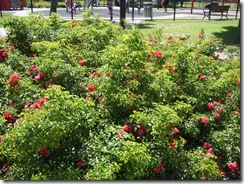 Genesis 19.  Lot’s wife looked behind her at the cities God was destroying and she became a pillar of salt.  She was not the only one reluctant to leave her past life. Lot himself begged that God spare Zoar, and God did — even though Lot eventually left that city out of fear (18-22,30). The daughters had lost their husbands, who stayed in the cities because they did not believe Lot’s warnings. The daughters cooked up a scheme to get Lot drunk, and committed incest with him so that they would have children. You can take the girl out of the city, but that is not taking the city out of the girl.

LORD, take the corruption of the city out of us!

Jefferson Vann is pastor of Piney Grove Advent Christian Church in Delco, North Carolina. You can contact him at marmsky@gmail.com -- !
View all posts by Jefferson Vann →
This entry was posted in commitment, holiness, obedience and tagged Genesis 19. Bookmark the permalink.