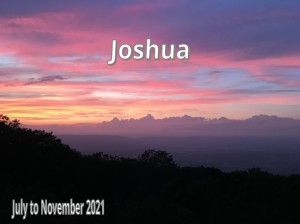 Joshua 22:30 When the priest Phinehas and the community leaders, the heads of Israel’s clans who were with him, heard what the descendants of Reuben, Gad, and Manasseh had to say, they were pleased.
Joshua 22:31 Phinehas son of Eleazar the priest said to the descendants of Reuben, Gad, and Manasseh, “Today we know that Yahveh is among us, because you have not committed this betrayal against him. As a result, you have rescued the Israelites from Yahveh’s power.”
Joshua 22:32 Then the priest Phinehas son of Eleazar and the leaders returned from the Reubenites and Gadites in the land of Gilead to the Israelites in the land of Canaan and brought back a report to them.
Joshua 22:33 The Israelites were pleased with the report, and they blessed God. They spoke no more about going to war against them to ravage the land where the Reubenites and Gadites lived.
Joshua 22:34 So the Reubenites and Gadites named the altar: It is a witness between us that Yahveh is God.

What a relief it was to find that the Eastern tribes were not enemies; they were just different. They had taken a different path in their walk with God, but they worshipped the same God.

Perhaps you and I ought to come to anyone who is different from us with that attitude at the outset. Others who trust Christ as we do are not our enemies. They are just different. Their differences are not enough to warrant our going to war with them. They are brothers, since we have the same Father.

Lord, thank you for those who have taken different paths to Christ. Their differences from us are just a sign of God’s greatness.

Jefferson Vann is pastor of Piney Grove Advent Christian Church in Delco, North Carolina. You can contact him at marmsky@gmail.com -- !
View all posts by Jefferson Vann →
This entry was posted in unity and tagged Joshua 22. Bookmark the permalink.