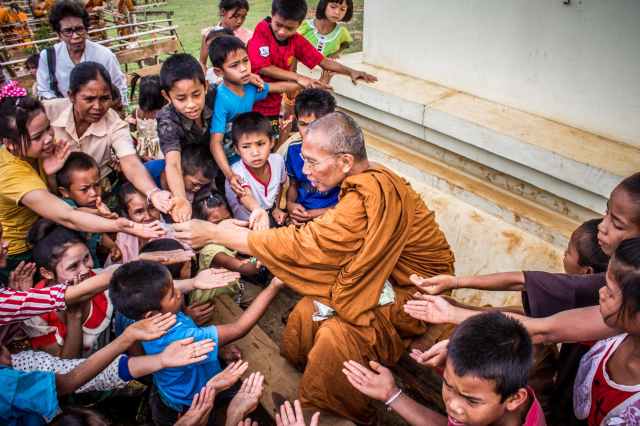 Colossians 2:6 So then, in the manner that you have received Christ Jesus as Lord, continue to live in him,

Colossians 2:7 being rooted and built up in him and established in the faith, just as you were taught, and overflowing with gratitude.

Colossians 2:8 Be careful that no one takes you captive through philosophy and empty deceit based on human tradition, based on the elements of the world, rather than Christ.

Colossians 2:9 You see, the entire fullness of God’s nature dwells bodily in Christ,

Colossians 2:10 and you have been filled by him, who is the head over every priority and authority.

Colossians 2:11 You were also circumcised in him with a circumcision not done with hands, by putting off the body of flesh, in the circumcision of Christ,

Colossians 2:12 when you were buried with him in baptism, in which you were also raised with him through faith in the achieving energy [1] of God, who raised him from the dead.

Colossians 2:13 And when you were dead in violations [2] and in the uncircumcision of your flesh, he made you alive with him and forgave us all our trespasses.

Colossians 2:14 He erased the certificate of debt, with its obligations, that was against us and opposed to us, and has taken it away by nailing it to the cross.

Colossians 2:15 He disarmed the priorities and authorities and disgraced them publicly; he triumphed over them in him.

Colossians 2:16 Therefore, don’t let anyone condemn you in regard to food and drink or in the matter of a festival or a new moon or a Sabbath day.

Colossians 2:17 These are a shadow of what was to come; the substance is Christ.

Colossians 2:18 Let no one condemn you by delighting in ascetic practices and the worship of angels, claiming access to a visionary realm. Such people are inflated by empty notions of their unspiritual mind.

Colossians 2:19 He doesn’t hold on to the head, from whom the whole body, nourished and held together by its ligaments and tendons, grows with growth from God.

Colossians 2:20 If you died with Christ to the elements of this world, why do you live as if you still belonged to the world? Why do you submit to regulations:

Colossians 2:22 All these regulations refer to what is destined to perish by being used up; they are human commands and doctrines.

Colossians 2:23 Although these have a reputation for wisdom by promoting self-made religion, false humility, and severe treatment of the body, they are not of any value in curbing self-indulgence.

Colossae had its share of people who were super-spiritual – people who spent all their time looking down their noses at the riffraff and condemning them for not following the latest religious fad. Paul had a word for these kinds of people. He called them unspiritual.

He explained to the Collossian Christians that they already had all they needed in Christ. In fact, anyone who insisted that they needed some kind of supplement to the holiness they already possessed were just adding onto a list of temporary things that will not last into the coming kingdom. Those man-made regulations are destined to perish by being used up. God’s grace is free, and it is the only thing that will last.

Thank you Lord, for our wholeness and holiness in Christ.

Jefferson Vann is pastor of Piney Grove Advent Christian Church in Delco, North Carolina. You can contact him at marmsky@gmail.com -- !
View all posts by Jefferson Vann →
This entry was posted in discernment, hypocrisy, pride, religion and tagged Colossians 2. Bookmark the permalink.